Singer/actress Lea Michele Is Back In The Studio Recording A Sophomore Album. 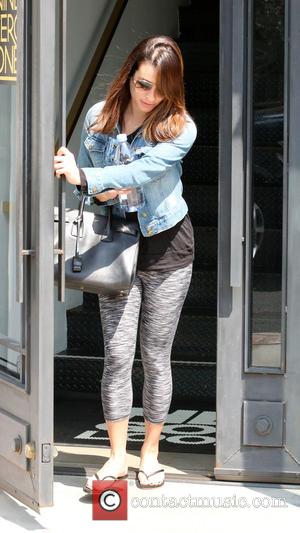 Picture: American actress and star of the hit TV show 'Glee' Lea Michele was snapped as she left a hair salon sporting a new hairstyle and...

The former Glee star released her debut record, Louder, last year (14), and now she is working on a follow-up.

Michele took to Twitter.com this week (beg13Apr15) to update fans on her latest project, posting a photo of herself in a recording booth, and writing, "Back at it in the recording studio today beginning my second record! The past two years since finishing #Louder I've experienced so many moments of strength, tears, joy, growth, change and happiness. I'm so excited to put all of that into this next record..."

The release of Louder was temporarily put on hold following the death of Michele's boyfriend Cory Monteith in 2013. She later included a track called You're Mine, inspired by her late love, as a last-minute addition on the album.