After six seasons, the series will air its last ever episode this Friday (March 20th).

We knew it was going to be emotional, but even though the final episode of ‘Glee’ is still days away you might want to get your tissues ready now, as details of Rachel Berry’s final song have been revealed. Written by Darren Criss (who plays Blaine Anderson in the series), ‘This Time’ is an emotional ballad which reflects the character's personal journey over the show’s six seasons. Lea Michele is preparing to say goodbye to Rachel Berry and 'Glee'.

“I wrote ‘This Time’ as a love note to all things ‘Glee’, Criss told Entertainment Weekly. “The show itself, the emotions of the people leaving it—both the characters and the actors themselves, the effect it had on everyone — I tried to cram all these ideas into a single person’s narrative.”

“I wanted Rachel’s words to encapsulate not only her own personal journey, but everyone’s experience of being a part of this show,” the actor and songwriter continued.

The song’s lyrics focus on Rachel’s time at McKinley High School where she has experienced her fair share of triumphs and tragedies, ‘These halls I've walked a thousand times / Heartbreaks and Valentines, friends of mine oh no’, the song reflects.

'I look at everything I was and everything I've loved and see how much I've grown/Even if the mirror doesn't see it, it's clear to me I see it / I can make it on my own / I'm not afraid of moving on and letting go / It's just so hard to say goodbye to what I know,' Rachel sings.

Speaking at this year’s PaleyFest last Friday, Criss described the process of penning Rachel’s final song as “a cool exercise”. “I basically wrote a love note to the entire experience," Criss continued.

"Rachel Berry goes off to her next chapter and this time she’s going to be strong and have that be her chariot, but it’s also this time that we [as a cast have] had together has been so special. Having Lea sing it to me is one of the most special moments of my career,” the 28 year old added. 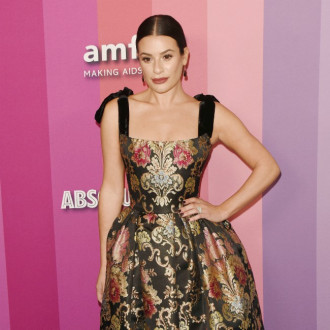