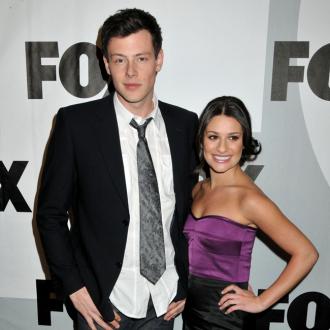 The brunette beauty - who declined to walk the turquoise carpet at the Gibson Amphitheatre in Los Angeles - gave an emotional speech as she picked up the prize for Choice TV Actress: Comedy in her first public appearance since her 'Glee' co-star passed away on July 13.

Lea - who was joined on stage by castmates Jenna Ushkowitz, Amber Riley and Kevin McHale for moral support - said: ''Thank you, guys. Thank you. I just wanted to be here today to personally thank all of you and tell everyone out there how much your love and support has meant to me over these very difficult past few weeks. Not that I had any doubt before, but you guys are most certainly the greatest fans in the world.

''I wanted to dedicate this award to Cory. For all of you out there who loved and admired Cory as much as I did, I promise that with your love we're going to get through this together. He was very special to me and also to the world. We were very lucky to witness his incredible talent, his handsome smile and his beautiful, beautiful heart.

''So whether you knew him personally or just as [his 'Glee' character] Finn Hudson, Cory reached out and he became a part of all of our hearts and that's where he will stay forever. So thank you guys so much. Thank you.''

Earlier in the evening, 'Glee' had picked up Best TV Comedy and the cast used the opportunity to also praise their late co-star, who died of a lethal combination of alcohol and heroin.

Amber said: ''We just want to say, although we lost someone that we really love, and that all of you guys love too, we are very fortunate to come back to a show where we feel the love of family, Cory was like a brother to us, like a dad.

''He was always ready to sign an autograph or take a picture with a fan, and he loves you Gleeks. And he loves his fans.''

Jenna added: ''So on behalf of our brother and our castmate, we know that Cory would've wanted to dedicate this award to you guys, so our condolences to all of you as well, and we love you so much. Thank you guys.''