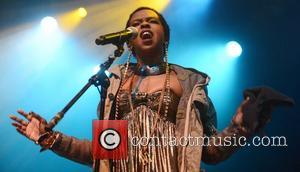 Lauryn Hill, the acclaimed R&B singer and former Fugees star, has been charged with failing to pay tax on more than $1.8 million in earnings. Hill reportedly failed to file tax returns to the US internal revenue service between 2005 and 2007, reports the UK's Guardian newspaper.
The singer will appear in court in Newark, New Jersey, to face charges on three counts of evading tax payments - each charge carries a maximum penalty of one year in prison, plus a $100,000 fine. In recent years, the singer has largely earned her money from music and film royalties - she owns and operates four companies, Creations Music, Boogie Tours, LH Productions 2011 and Studio 22. In terms of her own musical career, Hill has been largely inactive since her seminal 1996 album 'The Miseducation of Lauryn Hill', though she has staged a comeback of sorts in recent tears. Her second studio album 'The Return' - which has been 14 years in the making - is due for release later this year.
It will be an anxious wait for Hill, given that actor Wesley Snipes is currently serving a three year prison sentence for a similar charge. The 'Blade' star is currently being held at the 'MCKean' medium-security prison in Pennsylvania. He is not scheduled for release until July 19, 2013.