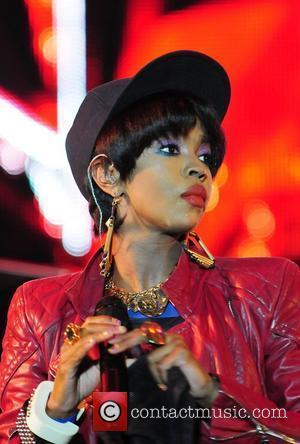 Picture: Lauryn Hill performs at and headlines the 6th Annual Jazz In The Gardens at the Sun Life Stadium Miami, Florida - 19.03.11

Hip-hop star Lauryn Hill has paved the way for a full Fugees reunion after reuniting with former bandmate Pras Michel onstage at a music festival in New York.
The Everything Is Everything singer/rapper was one of the headlining acts at the Big Apple leg of the Rock the Bells festival series on Saturday (03Sep11), and she performed her classic album The Miseducation of Lauryn Hill in its entirety.
Hill was unhappy with the sound quality throughout her set and repeatedly interrupted her songs to have words with the audio engineers, causing fans to grow restless.
But the audience screamed in excitement when she introduced her Fugees friend Michel to the stage midway through a performance of the group's track Fu-Gee-La, showing their affection for one another by hugging at the end.
Michel congratulated Hill on the July (11) birth of her sixth child, while Hill said of her pal's surprise appearance, "They just turn up! That's how the Fugees do!"
They went on to sing Ready or Not, and closed out the set with their smash hit, Killing Me Softly, with the usually fiercely-private Hill bringing her young kids out to wave to the crowd.
It was the first time the Fugees stars had appeared in public together since 2006, when the trio, with Wyclef Jean, split for the second time, two years after regrouping.
At the time of the break-up, cousins Michel and Jean blamed Hill's "issues" for their separation and claimed she needed psychiatric help - but it was clear on Saturday that the Ghetto Superstar hitmaker and Hill have since worked out their differences.
Other Rock the Bells acts included soul icon Erykah Badu, Raekwon and Ghostface Killah of Wu-Tang Clan, Cypress Hill and Nas, who brought Hill back to the stage later that night for their collaboration If I Ruled the World (Imagine That), which served as the event finale.