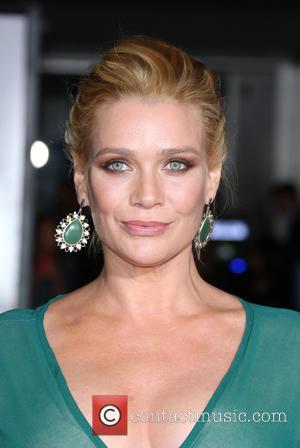 Picture: Laurie Holden - Shots from the red carpet as the stars arrived for the Los Angeles premiere of "Dumb And Dumber To" at the Regency...

The Walking Dead star had been cast as troubled surgeon Dr. Hannah Tramble on the Chicago Fire spin-off, and featured in scenes for a crossover episode in April (15).

However, Holden has since departed the show, which is due to debut on America's NBC network in November (15), simply citing "family reasons" for her exit.

In a statement, Holden writes, "I am so grateful to (creator) DICk Wolf, my fellow cast members, NBC and the entire Chicago Med team for their understanding.

"Sometimes we must make tough choices and, for family reasons, not doing Chicago Med is one of those for me at this time. I know the show is going to be a huge success and I'll be watching."

A spokesman for the series adds, "It was Laurie's decision to opt out of the series. We are sorry to see her go."

Producers have decided not to recast the role of Tramble and are instead working on adding three new female characters to the storyline.