Jacques-Yves Cousteau's first fascination with the ocean began with his career as a Naval pilot, but over the next 30 years of his life that developed into a desire to venture deeper than any man has ever been before. The sea might be a dangerous place, but to him it was a world of beauty, of purity, of opportunity. It was thanks to his life's work and improvement of the aqua-lung design that aided the development of open-circuit scuba technology, allowing divers and explorers to travel to depths never before thought possible. He even boat his own ship, Calypso, and brought his wife Simone and sons Jean-Michel and Philippe on his many adventures. He wrote many books including the best-selling 'Silent World: A Story of Undersea Discovery and Adventure' and won a Palme d'or at Cannes Film Festival for the documentary adaptation 'The Silent World'. He was later awarded the coveted U.S. Presidential Medal of Freedom for his work in 1985.

When Justine, a naive vegetarian high school graduate, arrives at college as a freshman, it's safe to say she is overwhelmed by what awaits her. Fitting in hasn't always come naturally, and never has it been so important, but the social rituals this particular veterinary school have in mind are disturbing to say the least. There's a boy in her class who she's interested in, and whose interest she appears to gain, but when she's round at his dorm, they are stormed by students in balaclavas and blood stained white coats. They are rounding up freshmen like animals into a sickening hazing ritual where they are forced to swallow unidentifiable raw meat from the labs. After that, Justine finds herself with an almost painful craving for a meat, and none of her fellow students are safe from her unquenchable hunger

Much more than an unsettling horror movie (although it is that too), this film gets under the skin to play with the audience's emotional response, eliciting dark sympathies with the killers. It's an uncanny trick that Belgian director Fabrice Du Welz (Calvaire) does extremely well. He's also adept at putting a fresh spin on a true story that's been filmed three times before (as The Honeymoon Killers in 1969, Deep Crimson in 1996 and Lonely Hearts in 2006) and has inspired countless other murderous-lovers-on-the-run movies. This time it has an internet twist, as Gloria (Lola Duenas) finds Michel (Laurent Lucas) on a dating website. She prepares for the date by leaving her daughter with a friend (Stephane Bissot); he prepares by burning her photo and chanting, "May Gloria succumb to my charms!" Not that he needs to bother, because she falls for him, invites him home and even gives him some cash for the road. But when he fails to answer her calls, she tracks him down and rumbles him as he seduces another woman for money. Instead of denouncing him, she proposes a partnership, and they pose as brother and sister as he woos Marguerite (Edith Le Merdy). But Gloria has a jealousy problem that turns violently fatal, so they move on to another widow (Anne-Marie Loop), and then another (Helena Noguerra), by which time Michel realises he'll need to sedate Gloria.

Yes, there's a dryly comical slant to the story even as it gets increasingly violent and unnerving. But it only works this well because the filmmaking is fiendishly clever and the actors give bravely realistic performances. Duenas is astonishing as Gloria: funny, passionate and utterly terrifying. And Lucas is just as unflinching in his portrayal of Michel's weakness for women. Both of these characters have very dark souls, but they're great at hiding this from their unsuspecting victims until the last possible moment. The entire cast offers open-handed performances that are utterly transparent, and everything is more alarming as a result.

By Chris Cabin
Excellent
The plight and paranoia of young marriage (and adulthood) has found a giddy practitioner in German director Dominik Moll. Moll's second film, With a Friend Like Harry..., took a very direct approach to the idea by using the return of a high school friend as a way to look into the boredom and grind of young parenthood, while also using the friend's sensuous fiancé as a point of catharsis. However simple that may seem, Harry was one of the best films of 2000, and now Moll is back with a much trickier proposition in Lemming. 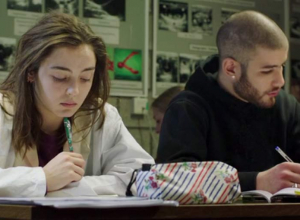 When Justine, a naive vegetarian high school graduate, arrives at college as a freshman, it's...

Much more than an unsettling horror movie (although it is that too), this film gets...