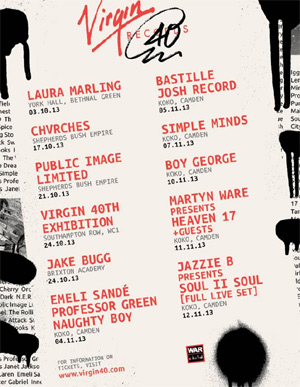 Virgin Records, the revolutionary British record label launched by Richard Branson in 1973 celebrates its 40th Anniversary this year. Since its early days the label has staked its reputation on doing the unexpected and supporting the maverick, creative drive of its artists; as such it's been home to some the most ground-breaking and influential acts of the past four decades including Mike Oldfield, Sex Pistols, Boy George, Human League, Simple Minds, Soul II Soul, Massive Attack, Neneh Cherry, Spice Girls,The Verve, Chemical Brothers, N.E.R.D, Daft Punk and more recently Swedish House Mafia, Bastille, Laura Marling and Emeli Sand'.

To celebrate this landmark year a series of live shows will take place this autumn featuring some of the most prolific names in music past and present. The shows will happen at prestigious venues across London including Shepherds Bush Empire, KOKO, Brixton Academy and York Hall.

The Virgin 40th Anniversary Live Celebrations will run over a month from mid-October to mid-November and the confirmed line-up so far is as follows:

Tickets for shows yet to go on sale including Emeli Sand', Bastille, Simple Minds, Martyn Ware and Jazzie B go on general sale on Friday 16th August at 9am

In tandem with the shows the Virgin 40 Exhibition will launch on October 24th at a spectacular venue on Southampton Row WC1. The exhibition will include photos (seen and unseen), seminal videos (including props) and memorabilia that capture the symbiotic collaborations between the cultural icons of the day.

In addition there will also be a beautiful art book edited by leading journalist Adrian Thrills. Adrian began his career editing the punk fanzine 48 Thrills before becoming one of the main feature writers for NME in the Eighties. He contributed fifty cover stories for the paper championing the 2-Tone movement and many of the post-punk, reggae and dance acts of the era; as well as writing the first ever cover story for iconic style magazine The Face featuring The Specials. The book includes contributions from celebrated writers including Mick Brown, Jon Savage, Chris Salewicz, Jude Rogers, Silvia Patterson, David Sinclair, Sheryl Garratt, Andrew Harrison, Rob Fitzpatrick, Craig Mclean.

There will also be a TV Documentary produced by Leopard films and directed by Paul Tilzey, the director of many award winning documentaries for BBC and Channel 4 including 'The 70s'; as well as a compilation CD with 2 x Cd set; one disc with current Virgin artists covering Virgin classics, another disc with original Virgin classics. There will also be a series of Virgin 40 compilation CDs spanning the four decades.

All the events to celebrate Virgin Records '40 years of disruptions' will be supporting the charity, War Child. War Child protects children from the brutal effects of war and received the Special Recognition Award at this year's BRIT Awards