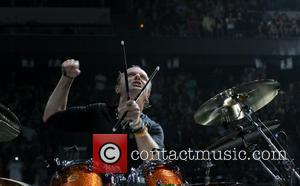 Metallica drummer Lars Ulrich regrets turning down the opportunity to compose the score for Quentin Tarantino's Kill Bill, branding it the "biggest mistake" he's ever made.
Tarantino approached Ulrich, explaining how he had choreographed the movie's iconic fight scenes to Metallica's music and asked him to help compose the score.
But Ulrich ended up turning down the project because he found the script too difficult to understand - and now he wishes he'd worked harder to secure the deal.
He tells Newsweek magazine, "One of the most surreal 30 minutes of my life was having Quentin Tarantino six inches from my face, eyes dancing, intensely animated, explaining in intricate detail how he had written and choreographed the two main fight scenes in the film (Kill Bill) to the Metallica songs 'Enter Sandman' and 'Sad But True'...
"The script. Man, was it thick and dense. I realised that most of this was written in a language that was outside of my realm of understanding. I had never encountered a narrative like this, set in, to me, a very foreign culture of martial arts and Asian myths. I just couldn't wrap my thick Danish head around it.
"I championed his movies, loved him as a person, but at the end of the 180 pages, I sat there somewhat bewildered and felt very uncool for not getting it. I wasn't capable of appreciating its brilliance...
"Over the next few weeks the whole thing fizzled out as I continued not trusting my instincts. In the end, I never got back to him. Probably the single biggest mistake I've made in the creative department. Of course Kill Bill turned out to be above and beyond brilliant, as have his subsequent movies, which have all been a significant part of my life in the 2000s. To this day I still worship the ground Q.T. walks on. If only ..."