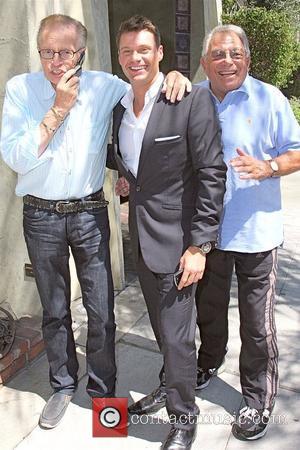 Larry King's country singer wife SHAWN has pulled out of performing a duet with Michael Jackson's brother JERMAINE at the upcoming tribute concert for the King of Pop in Vienna, Austria.
Shawn King was expected to take the stage with Jermaine at the gig next month (Sep09), and even masterminded an all-star tribute cover of the late singer's track Will You Be There - reportedly asking Whitney Houston, John Mayer and Lionel Richie to provide vocals.
But despite her heavy involvement in the tribute show, King has decided to step down from her planned duet with the former Jackson 5 star, due to "prior commitments".
A rep for the singer tells New York gossip column Page Six, "She still has great love and respect for Jermaine."

Larry King says death of his children feels 'out of order'

Larry King Shows The Young Guns How It's Done On Hulu

Larry King Wants To Be Frozen After Death

Larry King Going Into Stand Up Comedy After Cnn