Larry Hagman Not Scared Of Dying 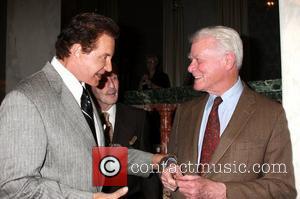 Veteran actor Larry Hagman's fears of dying have been "eliminated" following a drug-like near-death experience.
The 79-year-old Dallas star underwent a liver transplant in 1995 after years of heavy drinking and claims he felt he was close to dying during the operation.
And the actor admits the experience reminded him of his time on hallucinogenic drug Lsd - and put him at ease at the prospect of passing away.
He tells Britain's Daily Express, "Lsd helped me a lot and changed me for ever. It made me more compassionate, more understanding of others. I felt like I was moving towards a white light where I felt at one with the universe.
"I had almost the identical experience during my liver transplant when I was near death and found the same white light and the sense of oneness with everything. It felt so safe and comfortable I didn't want to come back but something told me it wasn't my time.
"It's eliminated my fear of death. I'm not keen on pain but death holds no fears for me any more."