Fans of Larry Hagman visited the set of 'Dallas' yesterday (02.12.12) for a memorial service in honour of the late actor, while his family held private services in Los Angeles and Dallas. 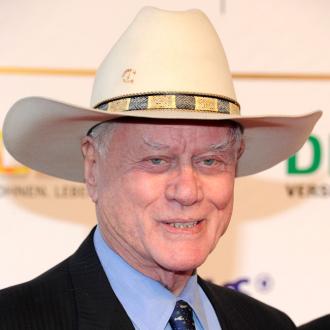 Larry Hagman's life was remembered by friends, family and fans in a number of memorial services at the weekend.

The 'Dallas' actor passed away last month at the age of 81, and his memory was celebrated by fans at an informal event on the grounds of Southfork Ranch in Parker, Texas, where scenes for the TV show are filmed on Sunday (02.12.12).

Afternoon tours of the site were made free in honour of the star, while a slideshow of his most memorable work was screened and fans were able to sign a guest book to be given to Larry's family.

Typically, the site attracts around 300 to 400 visitors a day, but around 1,500 attended yesterday.

Larry's wood and leather director's chair, adorned with his flashy belt buckle and trademark cowboy hat and with his boots placed carefully in front, welcomed friends, family and co-stars to the private memorial service held on Saturday (01.12.12) for the actor who rose to global fame as oil-rich villain J.R. Ewing in 'Dallas' - which was first screened from 1978 to 1991.

Also on Saturday a private memorial service was hosted by the actor's children at the fictional Southfork Ranch, with his co-stars Linda Gray and Patrick Duffy giving eulogies at the service.

Larry's family believed it was important to celebrate his life in Texas.

His son Preston Hagman said: ''Dallas was where he passed and 'Dallas' was in the middle of [filming] the show here. The show made him and 'Dallas' is a very important place for my father.''