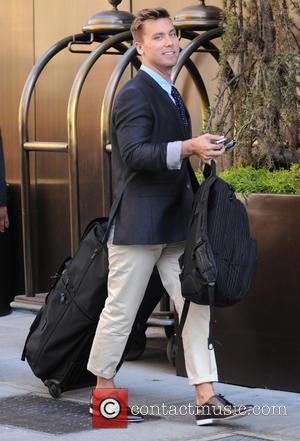 Singer Lance Bass has risked incurring the wrath of his old pal Amanda Bynes after going public with his fears for the embattled star's mental health, insisting he's "really scared for her".

The Easy A actress has been hitting headlines for all the wrong reasons in the past year after a number of traffic incidents in California and a drug arrest in New York last week (23May13), while she has been busy stirring up trouble on Twitter.com by lashing out at speculation she is mentally unstable and posting topless shots online.

She launched a vicious attack on her former friend Perez Hilton early on Thursday (30May13) after the celebrity blogger posted a photo online of a woman purported to be Bynes, bouncing around at an indoor trampoline centre in the Big Apple, and demanded he "stop living" and "kill yourself". The outburst came after Hilton urged the star's parents to step in and seek help for their daughter.

Now, another old friend, Bass, has voiced his concerns for Bynes during an interview on a Las Vegas radio station, revealing their mutual friends have been unable to get in contact with her.

The former 'N Sync member, who befriended Bynes in 2005 after producing her movie Love Wrecked, said, "It's one of those situations where obviously there's some mental problems there and she's not able to see that.