Randy Blythe, the singer with US heavy metal band Lamb of God has been acquitted of causing a fans death at a show in the Czech Republic. Blythe, 42, was arrested back in June last year, when his band entered the Czech Republic for their latest tour.

Unbeknownst to him, he was wanted by police in Prague, following an incident at a 2010 concert at the city’s Abaton club, at which a 19 year-old fan had died after Blythe pushed him off stage.

Though Randy acknowledged pushing the teenager, as the band do not tolerate people onstage, he denied knowing anything about the injuries that the young boy suffered. Today (March 5, 2013), the Municipal court in Prague ruled that he was not guilty, as his actions were not criminal. Instead, it was suggested that the venue owners should have been held responsible for the young boy’s death.

State prosecutors were calling for a five year prison sentence for Blythe and have said that they will appeal the verdict.

Speaking yesterday, the freed Blythe said of the victim, who cannot be named “I had no wish to harm him. He was just a boy. I wish he was still here,” Associated Press Reports. The fans relatives are seeking compensation and were told by the courts to file a separate case if they wish to pursue that route. 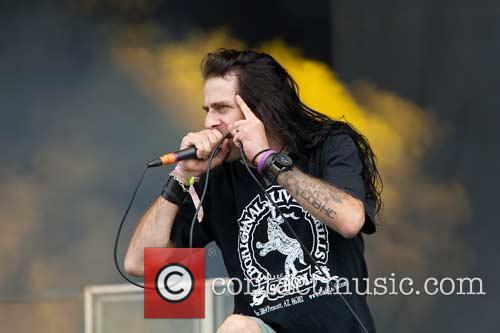 Randy Blythe Took Fan Out For Coffee After U.s. Homecoming

Lamb Of God Star To Replace Shawn Drover In Megadeth

Lamb Of God Star Back In Court On Manslaughter Charges