Lamar Odom was helped out of hospital bed

Lamar Odom has reportedly made a remarkable turnaround following his collapse in a Las Vegas brothel and has left his hospital bed. 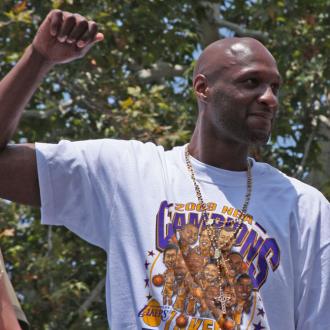 The basketball star - who was taken off a ventilator on Friday (16.10.15) after he collapsed last week during a drink and drug-fuelled binge in a Nevada brothel - was assisted from his bed into a chair over the weekend following his positive progress, according to E! News.

What's more, a source revealed he is breathing on his own but wears a mask to aid the flow of oxygen and has attempted to speak, though he's mainly using hand signals and giving thumbs up or thumbs down to communicate.

Meanwhile, the 35-year-old star has reportedly said ''hey baby'' and ''good morning'' to his estranged wife Khloe Kardashian, 31, who has been with him since he was admitted to hospital and has barely left his side.

The 'Keeping Up With the Kardashians' star - who filed for divorce from the athlete in December last year following four years of marriage - has slept by his side since the ordeal.

The insider explained: ''Khloe still hasn't left his side and looks very tired.

''As soon as Lamar wakes up, she rushes over to hold his hand. She sleeps on a pullout bed next to Lamar.''

Last week, an insider said Lamar had suffered ''loss of oxygen but also a possible stroke'' and ''is slowly making progress'' but he's ''not out of the woods yet.''

A 911 call made from the brothel confirmed Lamar took cocaine last Saturday and owner Dennis Hof revealed he was taking herbal Viagra and drinking cognac.