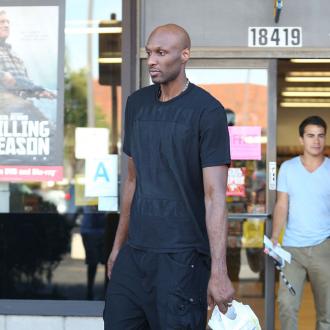 The 36-year-old criminal defence attorney and her new boyfriend made no attempt to conceal their romance as they kissed and held hands in front of photographers, according to the MailOnline website.

David is the CEO of DWE Talent, a production and management company that represents a number of celebrities, including Kimberly Stewart and Kim Kardashina's ex-boyfriend Ray J.

Polina recently claimed she witnessed Lamar, 33, smoke crack cocaine in her apartment while he allegedly lived with her for six weeks in June and July, and said he became highly paranoid.

She said: ''I did see it, he was a little paranoid, I found little wads of paper towels in pretty much every hole or crevis in my apartment after he had left.''

''I would leave him my laptop at home sometimes and he would call me using my Skype, but he was hesitant to do that.''

Lamar's wife Khloe recently kicked him out of their house in Tarzana, California, and is reportedly preparing to file divorce papers because of his substance abuse problem.