Lamar Odom has been able to leave his hospital bed to a nearby chair and is making good progress since being found collapsed after a drinks and drug binge at a brothel in Nevada, Las Vegas. 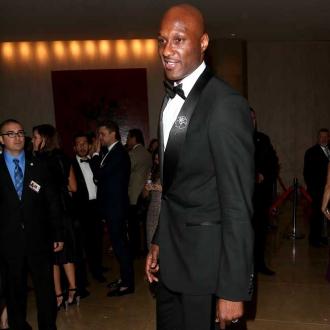 Lamar Odom has been able to leave his hospital bed.

The television personality collapsed last week after a drinks and drug binge at a brothel in Nevada, Las Vegas and is making good progress, having been helped into a chair, E! News reports.

He is also said to be breathing on his own but uses a mask to help aid the flow of oxygen. He is also able to make hand gestures as well as utter small phrases.

Meanwhile, a source previously claimed that Lamar has been able to say, 'Hey baby' and 'Good morning' to estranged wife Khloe Kardashian.

The 'Keeping Up With the Kardashians' star has kept a bedside vigil since Lamar was admitted to hospital, with an insider revealing: ''Khloe still hasn't left his side and looks very tired.

''As soon as Lamar wakes up, she rushes over to hold his hand. She sleeps on a pullout bed next to Lamar.''

It was previously revealed Lamar suffered from ''loss of oxygen but also a possible stroke'' and ''is slowly making progress'' but he's ''not out of the woods yet,'' whilst the brothel's owner Dennis Hof confirmed Lamar was taking herbal Viagra and drinking cognac before he was found collapsed.