Lamar Odom feels betrayed by his estranged wife Khloé Kardashian and believes she has been secretly hooking up with Matt Kemp for months. 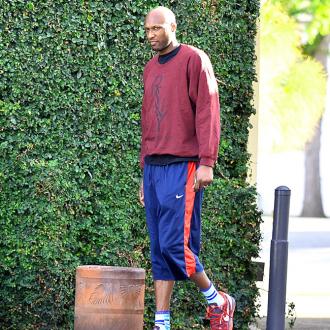 The 34-year-old basketball player believes the 'Keeping Up with the Kardashians' star, who filed for divorce from him last Friday (13.12.13), began secretly hooking up with her rumoured new beau, Matt Kemp, long before they split.

A source told gossip website RadarOnline.com: ''Lamar feels betrayed because Khloé was telling him she wanted to save the marriage and he was really trying to do so.

''He was far from the perfect husband, but Lamar genuinely thought there was a chance to save the relationship. Khloé always told Lamar she was only friends with Matt, but friends have been telling him that she had been hooking up with Kemp for months.''

The source also suggested that Lamar is even worried about the LA Dodgers star, who previously dated Rihanna, adding: ''Lamar hopes Matt doesn't get sucked into the Kardashian world. He is a super cool and mellow guy and according to Lamar, Kris Jenner will destroy Matt if the relationship with Khloé continues.''

But sources close to Khloé, 29, insist she is too heartbroken to even think about dating, and that she and Matt are just friends.

Lamar, who was accused of cheating on his estranged wife on a regular basis by three different women over the past few months and of being addicted to cocaine for two years, has ''already moved on''.

The insider said that the former LA Clippers star, who is currently training for several hours a day in a bid to win back his place on the team, is focused on spending time with his children, Destiny, 15, and Lamar Jr., 11, as well as their mother, Liza Morales.