Khloé Kardashian prefers working her problems out in the gym instead of going to a therapist. 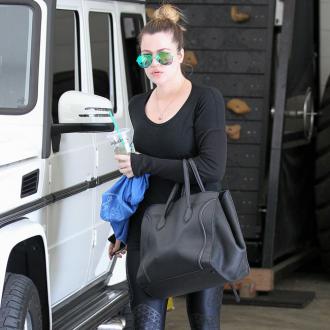 Khloé Kardashian prefers working her problems out in the gym instead of going to a therapist.

The 'Keeping Up with the Kardashians' star started exercising consistently up to five times a week shortly before splitting from Lamar Odom in December after four years of marriage, amid rumours he was addicted to cocaine and cheated on her multiple times, and admits the gym has become one of her favourite places to be.

The 29-year-old beauty shared pictures of herself lifting weights on Instagram today (30.05.14), with the caption: ''I love this place. I hate not being consistent in the gym. Consistency is key when it comes to my body. Thank you Mr. Gym for being my therapy...Mind, Body and Soul.''

Khloé flew her personal trainer, Gunnar Peterson, from Los Angeles to Europe last week so she didn't have to miss a training session in the run up to her sister Kim's wedding celebrations last weekend.

He previously said: ''You get definition from repetition...that includes repetition in the act of going to the gym. Khloé comes in three, four, five times a week, and that's someone who has an incredibly demanding schedule.''

Meanwhile, things are heating up between Khloé and her new boyfriend French Montana.

The reality TV star supported the rapper on the set of his music video for his upcoming single, 'They Don't Love You No More,' in Miami, Florida on Wednesday (28.05.14), where she was photographed playing with his ear and resting her arm on his shoulder.