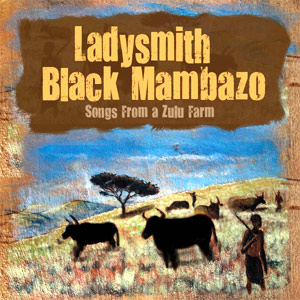 This February, Ladysmith Black Mambazo, the revered South African vocal group, release the most personal of all their albums to date. Songs From A Zulu Farm comprises a cornucopia of songs that older members of the group would have heard and sung themselves as kids growing up on Zulu farms in the 1940s and 50s. Songs with lessons and sentiments that have stayed with them on an extraordinary journey in life and music.

Songs From A Zulu Farm is the first of a trilogy of albums that sing of the group's life experiences in South Africa, taking listeners back to the ways of life and nature of group members who were born and raised on the farms outside of Ladysmith. This collection of original and traditional songs that sing of life on the farm coincides with a world tour that brings them to Britain for an extensive, 26-date tour from 19 May to 22 June.

The album's 16 songs are drawn deep from the well of the Zulu tradition, and begin with troublesome fowl, Yangiluma Inkukhu (The Biting Chicken) and some top-of-the-class animal noises from the group before they apply the familiar balm of Ladysmith's matchless harmonies. Then comes Laduma, a praise song to thunder and to the power of the Zulu people and the voices of the group itself. And after the thunder, the rain, and the tender call of Children Come Home, its descending group harmonies and Joseph Shabalala's counterpoint lead voice as warm and encompassing as a blanket and open fire.

Ladysmith Black Mambazo: Songs From a Zulu Farm is released by Proper on 7 February. The group tour the UK from 19 May.