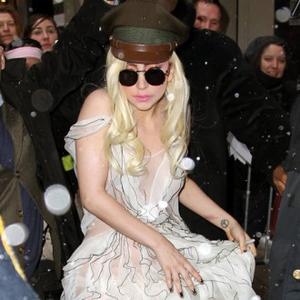 The eccentric singer reportedly splashed out thousands of dollars on the raunchy gift and a matching underwear set, which she presented to her while singing 'Happy Birthday'.

A source said: "Gaga wanted to give her something special. The Whip was made out of hundreds of diamonds and leather.

"When Beyonce received it she squealed with excitement."

The 'Poker Face' star handed over the saucy gifts backstage at Beyonce's husband Jay-Z's concert in Detroit last week, with the '99 Problems' hitmaker also making an effort to mark his spouse's birthday.

The source added to The Sun newspaper: "The dressing room was decorated with balloons and banners and a lot of champagne had been put on too."

Lady Gaga's eccentric present was likely to be inspired from her prison-themed music video for single 'Telephone' - which starred Beyonce.

The duo dressed in sexy leather and studded outfits for the shoot, with Gaga wearing metal chains and Beyonce sporting a tight black jumpsuit and chauffeur's hat.