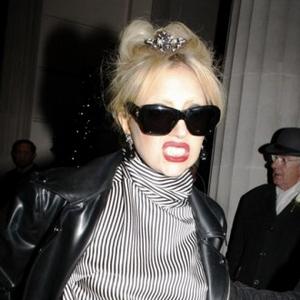 Lady GaGa had her "first real Marilyn Monroe moment" when she performed at the 10th anniversary of Bill Clinton's foundation last night (15.10.11).

The 'Born This Way' hitmaker sported a wavy blonde hairstyle and red lips - in a similar style to the late actress, who famously sang "Happy Birthday, Mr. President" to President John F. Kennedy in 1962 - and wished Clinton "Happy Birthday" before making a number of references to him as she performed at the Hollywood Bowl concert.

She joked: "Bill, I'm having my first real Marilyn moment! I always wanted to have one, and I was hoping that it didn't involve pills and a strand of pearls."

Gaga changed some of her lyrics to refer to the former US president - who turned 65 on August 19 -including swapping the title of her hit song 'Bad Romance' to 'Bill Romance'.

The politician sat next to his Secretary of State wife Hillary at the 'A Decade of Difference: A Concert Celebrating 10 Years of the William J. Clinton Foundation' event - which also saw performances by Stevie Wonder, Usher and U2's Bono and The Edge - and he praised his other half's charity work.

He said: "I want to thank Hillary because we met 40 years ago this year. When I met her, she was already doing the kind of work you see here long before it was cool."