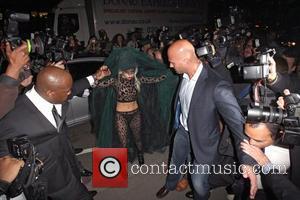 Lady GaGa's big online album reveal for her U.K. fans was ruined after the record leaked just hours before its scheduled web premiere on Wednesday (18May11).
The Poker Face superstar was set to treat her British devotees to a listen to Born This Way ahead of its official release on 23 May (11) by streaming it through a specially created microsite for Britain's Metro newspaper.
The album was available to listen to in Britain from 7am (Gmt) on Wednesday, but the record had already leaked in its entirety earlier in the week (begs16May11).
However, the leak didn't stop fans enjoying the material, with many taking to Twitter.com to praise Gaga's second studio release.
One fan, liamjames, tweeted, "You know when your dancing around your room to the live stream of Born This Way on metro.co.uk, yeah that's me!"
Another, named The FameDream, added, "@LadyGaga didn't lie when she promised Born This Way would be the album of the decade."