Lady GaGa has revealed that she goes to bed still wearing the outrageous costumes she wears on stage. 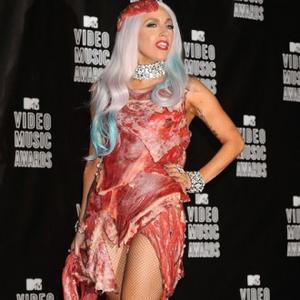 The 'Bad Romance' hitmaker has admitted that she often wakes up still wearing the outrageous wigs, make-up and outfits that she wears while performing and says her habit of forgetting to undress before she goes to bed amuses her friends when they visit her.

She said: "My best friends who often will crash at hotels where I'm at ... they will come visit me on the road, they always call me a beauty queen disaster.

"I wake up and my wig's falling off my head. My mole is on the other side of face. My fake mole, it's not fake it's surreal."

Speaking during an appearance on 'The Ellen Degeneres Show' - during which she performed her latest hit 'Judas' for the first time and confirmed that she is godmother to Sir Elton John and David Furnish's four-month-old son Zachary - the outlandish singer also admitted how "overwhelmed" she is by her success.

She said: "I'm 25 years old. I was asked to play Madison Square Garden. Sold out five nights and, quite frankly, it's very overwhelming."

The confession comes after she posted a tearful video online at the weekend, in which she talked of how she feels like a "loser" and claimed that people are trying to "destroy her".

In it she said: "I still feel like a loser kid in high school.