Lady GaGa reportedly put on a ''serious lapdance'' in the VIP section of New York nightclub BPM for her boyfriend Taylor Kinney, which was so sexy security guards had to draw the curtains. 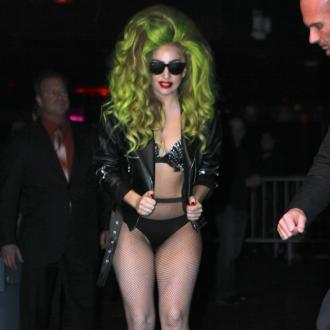 The 'Applause' singer reportedly put on a ''serious lapdance'' in the VIP section of New York nightclub BPM for her boyfriend of two years after her show at nearby Roseland Ballroom, and the performance was so sexy, security guards were forced to conceal the antics by drawing a curtain around the couple and 10 others in the area.

According to the New York Post's Page Six column, Gaga,28, entertained the 1,200 strong crowd by writhing on a stage before meeting Taylor, who had arrived to the bash separately.

A source explained: ''[Gaga] assumed a stripper persona and put on a show for him. She was doing a serious lapdance and they started making out. She jumped on a banquette, pulled Taylor's face into her crotch, was stroking his hair.''

Inside the curtained area Taylor grabbed Gaga's back as she sang the words ''do what you want . . . with my body,'' from her recent duet with R. Kelly and she weirdly also spanked a female friend with a rose.

It seems Taylor, 32, was delighted by thee performance as sources claim he was overheard gushing about his girlfriend's raunchy display.