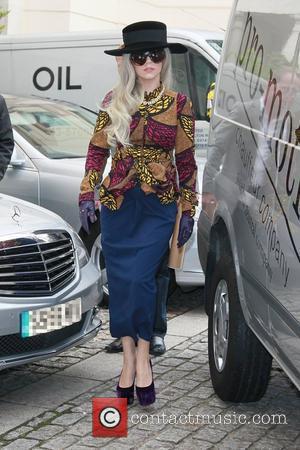 Picture: Lady Gaga seen leaving her hotel in London to head up to Manchester for the Children In Need Rocks charity gala London, England -...

Pop superstar Lady GaGa is teaming up with Sir Elton John again for a new duet.
Gaga, who is godmother to the veteran singer's son Zachary, has convinced the Rocket Man to collaborate after impressing him with a new track she has written for her upcoming album.
She tells U.K. talk show host Alan Carr, "I haven't really duetted with anyone and my next duet, I believe, will be with Elton. I'm already working on my next album and I played him a song that I wrote and he really loved it. I don't want to give anything (else) away!"
The stars first teamed up for a live performance at the Grammy Awards last year (10) and they also recorded a song for Sir Elton's animated movie project, Gnomeo & Juliet.