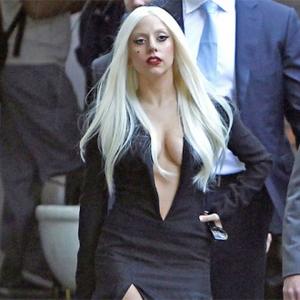 Lady GaGa made a surprise appearance at the International Emmy Awards last night (21.11.11).

The 'Bad Romance' hitmaker presented 'American Idol' and 'So You Think You Can Dance' executive producer Nigel Lythgoe with the honorary International Emmy Founders Award and expressed her gratitude for "all the early opportunities he gave me to perform on TV".

Also paying tribute to the $140 million he has raised for charity through the Dizzy Feet Foundation and 'Idol Gives Back' and hailing him as her "favourite producer", she added: "He has always helped to nurture and foster my ideas, no matter how crazy or demographic-unfriendly they may have been.

"He always spoke poetically about the pursuit of widening the boundaries of love and acceptance in TV."

Referring to the villain in the 'Harry Potter franchise, he said: "I now call Simon Lord Voldemort because he must not be named because every time I name him the press say that we're enemies and we're fighting each other.

"That's not true at all. Simon has no enemies whatsoever in the world. He just has a lot of friends who hate him."

Nigel also praised Gaga, describing her as "the most creatively talented woman in the world of show business right now".

Other winners at the ceremony - which honours the best in television programming outside the US and featured 40 nominees from 20 countries - included UK drama 'Accused', which scooped Best Performance by an Actor for Christopher Eccleston and Best Drama Series, a category it initially wasn't shortlisted for.

The programme - which was written and created by Jimmy McGovern - replaced 'Sherlock' in the category as the latter had previously been nominated for a Primetime Emmy Award, and a show cannot feature in both competitions in the same year.

Other British successes included Dame Julie Walters, who won Best Performance by an Actress for her portrayal of late politician Mo Mowlam in 'Mo', while ' Gareth Malone Goes to Glyndebourne' received the Arts Programming honour and 'World's Strictest Parents' was top Non-Scripted Entertainment.

Zee TV founder Shubhash Chandra was recognised for his work with the International Emmy Directorate Award.

Jason Priestley hosted the awards, which took place at the Hilton New York Hotel, for the second year running.

Best Performance by an Actor:

Best Performance by an Actress: