Lady GaGa joined The Rolling Stones on12 stage for their final '50 and Counting' show in Newark, New Jersey, on Saturday evening (15..12) - singing a rendition of their classic tracks 'Gimme Shelter' and 'Brown Sugar'. 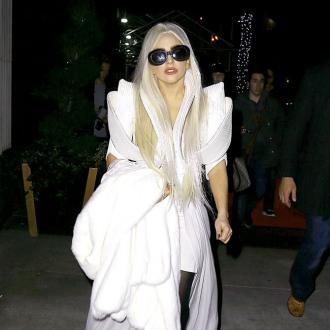 Lady GaGa performed with The Rolling Stones in New York on Saturday (15.12.12).

The 'Born This Way' hitmaker joined the veteran rockers - Sir Mick Jagger, Ronnie Wood, Charlie Watts and Keith Richards - for their final '50 and Counting' show at the Prudential Center in Newark, New Jersey - where she sang along to the rockers' classic hit 'Gimme Shelter' followed by a rendition of 'Brown Sugar'.

Gaga, 26, tweeted her excitement about the special appearance the Thursday before, posting: ''Gimme Shelter. It just two nights away!! :) Can't wait to sing with the Rolling Stones on Saturday Night. In 2007 i was stripping to them. (sic)''

The band were also joined by Bruce Springsteen for their track 'Tumbling Dice' and The Black Keys took to the stage to sing 'Who Do You Love?' with them to mark the end of their successful anniversary tour.

The Rolling Stones performed 22 songs for their final show, with another guest appearance from John Mayer on their 1978 hit 'Respectable' as well as their former bandmate Mick Taylor returning to play with them.

After their gig, the band and Gaga enjoyed a ''relaxed'' after party at The Carlyle Hotel in New York - where they celebrated until 3am.

An insider revealed to the New York Daily News newspaper: ''The party went from around midnight to almost 3am. They really just hung out, relaxed and all chatted with each other.''