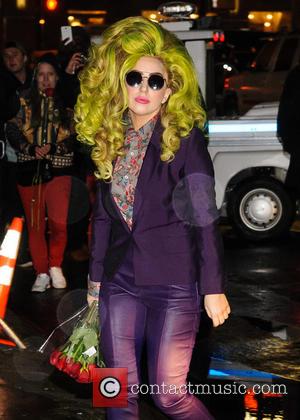 Lady GaGa has threatened to reignite the controversy over her heavily-criticised performance at the South by Southwest festival by showing off a painting given to her by the 'vomit artist' who shared the stage.

The pop superstar hit headlines by teaming up with performance artist Millie Brown, who threw up green and black liquid over the singer during her show at the event in Austin, Texas last month (Mar14).

Gaga was accused of glamorising eating disorders by promoting vomit painting, and she has now revived the debate by publishing a photograph of an artwork given to her by Brown.

The Poker Face star posted a snap of the vomit piece on her Littlemonsters.com website, adding in a caption, "Millie Brown made this for me, she said it was 'Artpop' and represented our artistic revolution. I'm so happy people are talking about art more. We must keep it alive."

Gaga's vomit stunt previously came under fire from fellow singer Demi Lovato, who has battled eating disorders in the past, but the kooky star defended her decision to promote vomit painting by insisting the practice is "art in its purest form".