Lady GaGa has shaved a section of her hair off in tribute to her photographer friend Terry Richardson's late mother. 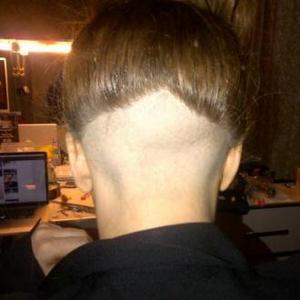 Lady GaGa has shaved her head as a tribute to her friend's late mother.

The 'Born This Way' singer unveiled her dramatic new hairdo on twitter last night (11.09.12), explaining it was to honour her close friend Terry Richardson's mum Annie Lomax, who passed away yesterday aged 74.

The eccentric pop star posted a photograph of the back of her head on the social network, revealing a large shaved section at the bottom, along with a caption which references her new track 'Princess D.I.E', a tribute to the late Princess Diana.

Gaga wrote: ''I did it for u Terry. I'm sorry about ure mommy. She has princess die, but were all princess high. (sic)''

The 26-year-old superstar was keen to prove to her fans she hadn't cut all her hair off, adding a picture of her with her long brown hair in a top knot. She commented: ''But we still have glamour in The Front.''

Gaga and renowned photographer Terry - who is best known for shooting raunchy pictures of the likes of Lindsay Lohan and Kate Moss - have been friends for years, and he was the mastermind behind her 'Monster Ball' tour photo book, 'Lady Gaga X Terry Richardson'.

Gaga is famed for her ever-changing look and collection of wigs, rocking blonde, orange, grey and Pink hair in the last year alone.

Gaga caused a stir in August by dyeing her hair a natural-looking shade of brown.