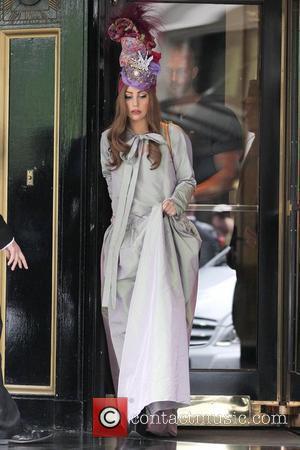 Picture: Lady Gaga leaving her hotel and heading to Manchester, where she is due to perform next on her 'Monster Ball' tour. London, England - 10.09.12

Lady GaGa has shaved her head in a show of support for her photographer friend Terry Richardson following the death of his mother this week (beg10Sep12).
The famed snapper has been left devastated after his mum, Annie Lomax, passed away on Tuesday (11Sep12).
Gaga took to her Little Monsters website to share the sad news, and she posted a picture of her radical new hairstyle.
In the snap, Gaga appears to have cut off her long hair and shaved the back of her head, and she reveals her new look is a tribute to Richardson's mum.
She writes, "I did it for u (sic) Terry. I'm sorry about ure (your) mummy. She has Princess Die (late British royal, Diana, Princess of Wales), but were (we are) all princess high."
Richardson, who collaborated with Gaga on a recent picture book, posted his own tribute to his mother on his online blog, sharing a picture of her and writing, "R.I.P. Annie Lomax, my mom 1938-2012."