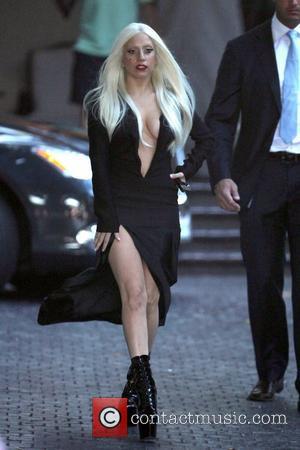 Picture: Lady Gaga sends a letter down to her fans and paparazzi who were waiting outside the Chateau Marmont. Included with the letter were McDonald's burgers...

Lady GaGa was spotted leaving the Chateau Marmont in Hollywood on Thursday (28th July 2011), looking remarkably similar to another diva of the stage. The singer donned a revealing black dress with fake eyelashes, deep red lipstick and straight blonde hair - a look often favoured by Christina Aguilera.
According to The Sun newspaper, Gaga had sent out bags of MCDonalds fast-food to fans waiting outside the hotel. She also wrote them a handwritten note which read, "Dear little monsters. Thank you for singing to me all day and night. I love you with all my heart. You make everyday worth living. Kisses to the cops for keeping you safe. Love Lady GaGa". The star unveiled her new look after emerging from the hotel to leave for her appearance on the Jimmy Kimmel Live show. The singer later performed behind the ABC late-night studio, playing her new single 'You and I' and fan-favourite 'The Edge of Glory'. The concert caused a section of Hawthorne Avenue, close to Grauman's Chinese Theatre, to be closed off. Kimmel himself praised the singer's performance on Twitter, telling followers, "Those who aren't fans of @ladygaga haven't seen her perform live. She is as good as they get".
Lady Gaga's second studio album 'Born This Way' topped the charts in over 20 countries, selling over 1 million copies in its first week of sales.