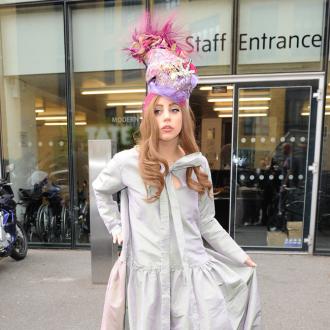 The 'You and I' singer brought her 'Born This Way Ball' to the Estadio Nacional de Costa Rica stadium in San Jose on Saturday night (03.11.12) and was told it was the most attended concert in the history of the Central American country.

She wrote on her twitter page: ''In Costa Rica tonight for stadium show. Thank you so much to everyone for buying a ticket to the BTWBALL. I will leave my heart on the stage ... Thank you Costa Rica, they told me it was the biggest show and turnout they've ever had. means so much to me. luckiest girl alive. (sic)''

Gaga's stage spectacular even eclipsed a massive heavy metal concert by Metallica and the 26-year-old pop superstar is thrilled with her achievement.

She added in other tweets: ''the second biggest show to the BTWBALL in Costa Rica was Metallica. @LadyStarlightNy are we dreaming ... Fantastico (sic)''

Despite the success she is experiencing on tour, Gaga's thoughts and prayers are still with the residents of her hometown of New York City following the devastation caused by superstorm Sandy.

The proud New Yorker posted on twitter: ''East coast how are you holding up? How are you New York? Staying strong i hope, thinking of you all the time. Can't even watch news feed ... I'll be there as soon as i can to help my old neighborhood. I'm on tour + can't let my fans down. I want to help with my hands with all of u (sic)''