Lady GaGa claims she often pees in her ''dressing room trash can,'' as she has no time to go to the toilet when she is getting ready for her concerts. 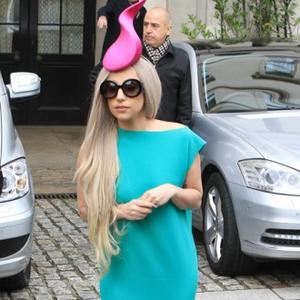 Lady GaGa claims she often pees in her "dressing room trash can".

The 'Born This Way' star takes so much time getting into her elaborate stage outfits she says it isn't always practical for her to go down the corridor to use the toilet.

Speaking with Alan Carr on his 'Chatty Man' TV talk show, she said: "I do quite often pee in the dressing room, in the trash can.

"It would have been an interesting photo today because I had a big Pink bow on, and I was over the trash can. The bathroom is down the hall, and I was naked. It was just me, my bow and my nakedness.

"Me and my dustbin have a very important relationship."

She then joked that if she had toilet breaks, she would gain a reputation as "Latey Gaga".

Gaga had earlier arrived at the studio in a blue dress with a pink hat on, which resembled a sperm cell.

Meanwhile, the 25-year-old singer is set to unveil her longest ever video tonight (17.11.11) after her appearance at the Children in Need Rocks Manchester charity show, in the North of England.

The promo 'Marry The Night: The Prelude Pathetique' video for her latest single is said to be 15 minutes long.

She said the short film is "the longest video I've released to date. The beginning of the story I never told you".