Lady GaGa locked herself in a cupboard to get ''into the groove'' before her performance at the Capital FM Jingle Bell Ball this weekend. 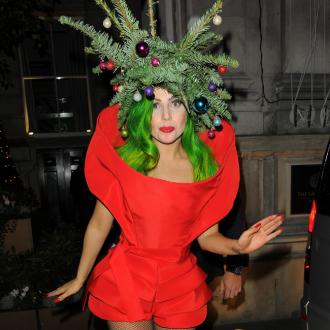 The eccentric singer got into the mood for her headlining gig in London on Sunday (08.12.13) by locking herself in one of her dressing rooms' wardrobes and meditating while her dancers warmed up outside.

A source told The Sun newspaper: ''Gaga got into the cupboard for about an hour or so before going on. Apparently she wanted to get herself into the groove and energy of the arena.

''It was in another one of the dressing rooms allocated to her. She left her main room to enter this other one where her dancers were and climbed in.''

A backstage eye-witness told the paper they saw the 27-year-old hitmaker sitting cross-legged, deep in meditation.

It appears her bizarre pre-show ritual worked since Gaga put on a standout performance, belting out old favourites including 'Bad Romance' and a string of new hits including 'Applause'.

The star stole the limelight once her performance was over by dressing as a Christmas tree, wearing her green locks in loose curls, topped off with a hat made of branches with a gold star at the top.

Gaga - who was joined by the likes of Jessie J, Little Mix, Jason Derulo and Dizzee Rascal at the Capital FM Jingle Bell Ball - also made time for one of her youngest fan backstage, two-year-old Harper Beckham.