Lady GaGa's collaborators have designed a fibre optic wig inspired by the concept of a Disney Princess at a rave. 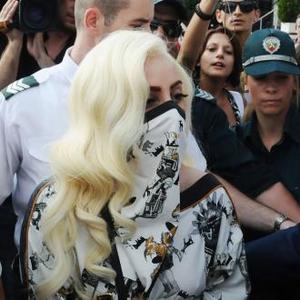 Lady GaGa has created a fibre optic wig inspired by the Disney Princesses.

The 'Judas' singer - who is renowned for her love of eccentric stage outfits - worked on the special creation with her collaborators the Haus of Gaga for six months, and claims The Hair piece was inspired by the idea of one of the animated characters at a dance music rave.

Speaking in a British accent in a video post on her LittleMonsters.com website, the pop superstar said: ''Hi everyone, this is Gaga. So I wanted to show you one of the newest inventions from the Haus of Gaga - this is a hand-made wig by Frederic Aspiras.

''It's an innovation that myself and Tara and Frederick came up with, with my friend Chris and we've been working on it for six months. Over six months. And we are going to light it up for you so you can see. So the wig is made up of a mixture of real human hair and the finest fibre-optics in existence - they move and feel like real hair. It was handmade. The hair was inspired by taking a Disney Princess and putting her in a rave.''

The wig can also be used in her live shows as it can be connected to her lighting board and be illuminated in time to her music.

Gaga added: ''It (the wig) can also plug into the lighting board for my show and my lighting designer can control it. Artpop.''

The Disney Princesses include Snow White, Cinderella, Ariel, Belle and Rapunzel and all have featured in animated films.

Meanwhile, Gaga has also announced her new album 'ARTPOP' will be released as a smart phone app.

The 26-year-old singer is planning to drop the record in early 2013 and she has revealed her third record will be a ''multimedia experience'' like no other.

Writing on the LittleMonsters.com website, she revealed: ''I'm excited to tell you all that ARTPOP is going to be a multimedia experience that comes in different forms. The most major way to fully immerse yourself in ARTPOP is through the app.

''ARTPOP will be released as an iPad, iPhone, mobile and computer compatible application that is completely interactive with chats, films for every song, extra music, content, Gaga-inspired games, fashion updates, magazines, and more still in the works!''