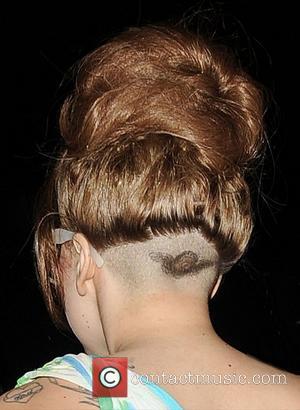 Picture: Lady Gaga showing her tattoo of a winged cherub on the back of her head as she arrives back at her hotel, following her performance...

Pop star Lady GaGa caused a stir in the Netherlands on Monday (17Sep12) by lighting a cigarette onstage and declaring her love for cannabis.

The Poker Face hitmaker was performing at the Ziggo Dome in Amsterdam - the cannabis capital of the world - when a fan threw her a pack of tobacco cigarettes, which she sniffed before declaring, "Cigarettes? No, no, no."

She was then handed what appeared to be a marijuana joint and told the crowd, "Ah, thank you! Holland, is it real? Don't tease me..." before sparking up and inhaling.

She added, "Oh, it's real. For those of you who are wondering if I'm high right now, I'm not. That is not nearly enough to get me high."

Gaga, who also donned a T-shirt with a picture of two marijuana leaves on it, later told fans, "I thought that in Holland it would be an appropriate place to discuss my current openness about being a cannabis smoker because I have decided that I want you to know the truth, which is that it has totally changed my life and that I've really cut down on drinking. It's, like, been a totally spiritual experience for me with my music."

The country is famed for its tolerant drug policy, but Dutch authorities plan to roll out new legislation banning the sale of marijuana to non-residents next year (13).