Lady GaGa was inspired by Lily Allen to write her 2009 track 'So Happy I Could Die', from her 'The Fame Monster' album. 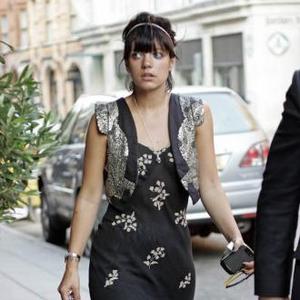 Lady GaGa was inspired by Lily Allen to write 'So Happy I Could Die'.

Lily told how she had a ''weird dream'' about the 'Born This Way' hitmaker, prompting the US star to make the Revelation about how she had been thinking of her while composing the 2009 track, included on her 'The Fame Monster' album.

Lily tweeted: ''I had a really weird dream about Lady Gaga last night.''

Gaga replied: ''@lilyrosecooper Next time you have that dream can u take lots of pictures so I can see?''

Lily - who is currently expecting her second child with husband Sam Cooper - then wrote: ''@ladygaga god I Hope it doesn't happen again, if I wasn't with child I would have chomped my way through a bottle of Xanax by now #theanxiety (sic).''

Gaga wrote back: ''@lilyrosecooper that would never happen! Wed more likely kidnap you + beg you to sing 'So Happy I Could Die'. thought of you when I wrote that (sic).''

Lily - who has a nine-month-old daughter Ethel with Sam - put her singing career on hold to concentrate on having a family in 2009, but recently returned to the stage to perform with Pink at a secret show at Sony Studios.

She said: ''It was great, felt strange being back on stage again but Pink made me feel at ease. Really enjoyed myself though. Can't wait to get back out there.''