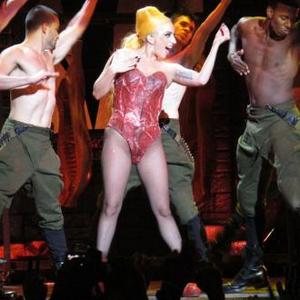 The 'Marry the Night' singer was performing in Brisbane, Australia, over the weekend when she was given the raunchy gift by someone in the audience.

She said: ''Are you telling me I'm not getting enough action? Thank you very much for worrying about my sex life - but I will assure you that all is well.''

Earlier this month, the 'Bad Romance' hitmaker - who is currently on her 'Born This Way Ball' - suffered concussion during a concert in New Zealand.

Gaga was performing her hit song 'Judas' at the concert in Auckland when a dancer accidentally hit her on the head with a pole which was being used as a stage prop.

However, Gaga carried on with the show as she didn't want to let her fans down.

She told the audience: ''I want to apologise. I did hit my head and I think I may have a concussion but don't you worry I will finish this show.''