Lady GaGa is to spend £1.2 million to renovate her home to make it into a shrine to her onstage persona, including a replica of the 'egg' vessel she climbed out of at the Grammys. 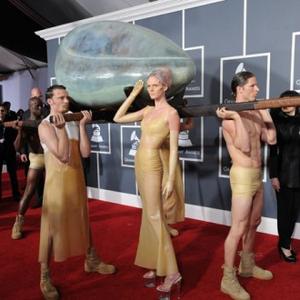 Lady GaGa is getting an 'egg' bed.

The eccentric singer is spending £1.2 million on renovating her New York condo as a shrine to her onstage persona and it will include a version of the 'egg' vessel she arrived at and climbed out of at the recent Grammy Awards.

Her home will also showcase her flamboyant costumes, several props and keepsakes she has collected on her travels, which include bones and masks.

An insider said: "This house project is Gaga's new baby.

"The egg vessel is being made especially for her. She'll be able to sleep in it, in place of a double bed. She felt so a home in the egg on stage - she spent hours in it meditating and says when she's in it she feels at peace."

Architects will reportedly start work on the 'Born This Way' singer's property in a fortnight's time and she is said to have also enlisted the help of her close friend Rick Genest and fashion director Nicola Formichetti to advise her on the interior design.

Last month, Gaga revealed she will always live in the New York neighbourhood where she grew up as she wants a "normal" life and was left unimpressed after a brief stint on the Hollywood party scene.

She said: "I actually made a choice to keep my life pretty normal.

"Some point about two years ago I said to myself, 'OK, am I going to put my toe in Hollywood's pond and figure out if I want to live a glamorous life and assimilate to the glamorous lifestyle', but I really didn't want to do it."

"I still live where I always lived, I still hang out and drink whisky at the same bars. I still go to the same hardware store."