Lady Gaga gets covered in vomit at SXSW

Lady GaGa was covered in vomit during her concert at the South by Southwest festival in Austin, Texas, on Thursday evening (13.03.14). 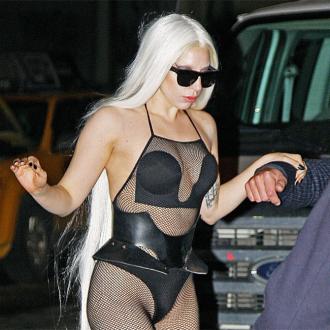 Lady GaGa was vomited on during her performance at the South by Southwest festival.

The 27-year-old pop superstar took to the Doritos #BoldStage at SXSW in Austin, Texas, on Thursday night (14.03.14) and during her rendition of 'Swine' Gaga invited 'vomit painter' Millie Brown on stage.

Brown drank a bottle of green liquid and then pushed her fingers down her throat so she could puke the substance onto the singer as she played drums.

Gaga opened the show by roasting herself like a pig on a spit as her backing dancers stroked her with barbecue brushes.

The musician and another woman then straddled a mechanical pig which had a keyboard for Gaga to play, and after she finished performing on the pig performance artist Brown then began painting Gaga with black liquid.

The concert was held to celebrate her Born This Way Foundation with fans only earning entry by completing a Doritos Bold Mission.

Gaga took time out from her eccentric and extravagant performance to address her fans with some words of inspiration.

Before playing 'Dope', she said: ''It's so much easier to be yourself than it is to be somebody else. Because then you have to pretend to be someone else and like things that you don't like and do stuff that you don't want to do.''

Gaga is set to give the SXSW festival and conference's keynote speech this morning (14.03.14).

The year's event has been marred by tragedy after a car was driven into a group of revellers at approximately 12:30am on Thursday morning near the Mohawk club on Austin's Red River Street leaving two dead and 23 injured.

A spokeswoman for the Austin Police Department has revealed

Rashad Charjuan Owens - a 21-year-old man from Killeen, Texas - was being held in connection with the incident and is set to face two counts of capital murder and 23 counts of aggravated assault.