Lady Gaga G.U.Y. Video: We Try and Figure Out What The Hell Is Going On

Far be it from us to try and analyse anything Lady GaGa does, but when she unleashed her new eight minute ‘G.U.Y.’ video, we just had to have a go. ‘Real Housewives’, a resurrected Michael Jackson and a whole load of flowers got us asking, Gaga what’s going on? She didn't answer, but here's a quick walkthrough of the video that might just be her weirdest moment yet.

We begin our eight minute trek into Gaga's mind as money falls from the sky and gets pocketed by a load of greedy men in suits, (record company executives we're guessing). On the ground is Gaga, who appears to be a sort of phoenix style angel who has massive wings and wears a body stocking. Oh she’s also got an arrow through her, ouch. As the wounded Gaga bird stumbles around she’s eventually helped out by some hooded rubber enthusiasts who bring her to a huge outdoor pool where she’s set to be ‘reborn’.

Next Gaga is given a huge flower headdress and emerged in the water as she sings ‘take me to your planet, take me to your venus’. Then there's an intresting cameo from the cast of the ‘Real Housewives of Beverly Hills’ including Kim Richards who plays the guitar in Gaga's band. An acknowledgment perhaps that modern celebrity culture is now being driven by reality televsion? Or maybe she's just a big fan of the show. 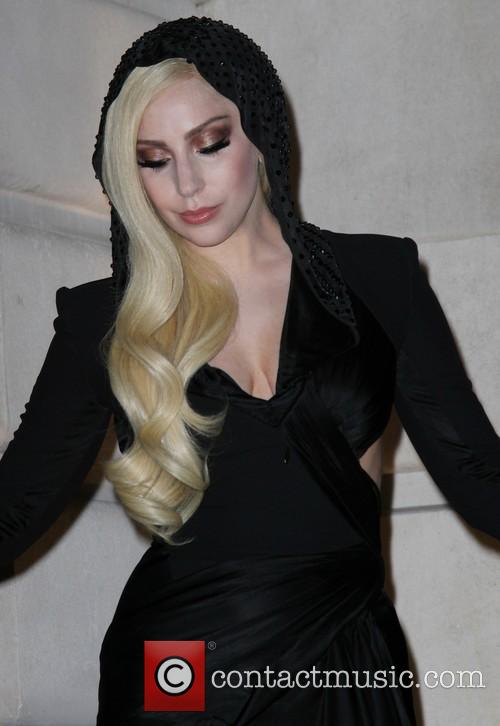 When we next see Gaga she’s all in white, with an epic Vegas showgirl style feather headdress. Bravo executive Andy Cohen then appears as a God like figure smiling down from the heavens. Another reference to the power of reality television. Oh yeah, then we actually get into the actual 'G.U.Y.' song. At another point Gaga is seen wearing what can only be described as a cardboard teddy bear costume. That's just creepy. We're then treated to a dance routine presented in all white but still there’s loads of flowers as well as some synchronised swimmers giving it the Ethel Merman in the pool. Gaga then swaps the white look for a gold theme, dancing in a more ornate Roman baths setting, complete with many open shirted men (a Gaga video staple).

Then the real weirdness starts. Gaga enters a room with coffins which are hooked up to a computer. After her helper types in ‘gamemodeArtpop’ (a reference perhaps to the ‘Minecraft’ game which has done a few Gaga parodies) the coffins are opened. Inside is Michael Jackson, Ghandi and Jesus. Huh? These three all seem to have their blood taken making a formula labelled G.U.Y. There’s also some pretty raunchy on the floor dancing interjected here with Gaga in jeans and a bra rolling around with her shirtless dance partner accompanied by some other dancers. Gaga then goes full on badass as she takes over an office full of suits complete with her money cannon and wearing another epic headress. The suits then all march out as we’re treated to more dancing as Gaga enjoys a bit of a romp with one lucky dancer.