Lady GaGa has bought three pairs of Alexander McQueen 'Armadillo' heels for £190,000 as a ''memory'' of her friendship with the late designer. 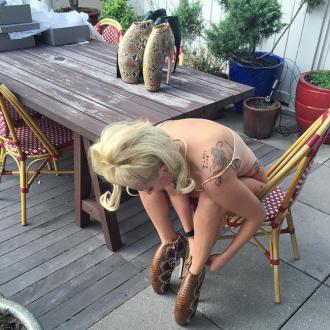 The 29-year-old singer has taken to Instagram to reveal she was the winning bidder for three pairs of the iconic boots, auctioned at Christie's in aid of UNICEF, and called them a gift ''from heaven''.

Along with a photo of Gaga sat down trying on her new shoes - taken by her fiance Taylor Kinney - she shared: ''When a gift comes to you from Heaven photo by Taylor Kinney best fiancée ever.''

The 'Poker Face' star has made no secret of how much of a fan she is of McQueen - who tragically died in 2010 -, having also worn the 'Armadillo' heels in her 'Bad Romance' music video, and later revealed she sees her new shoes as a ''sign of love from beyond''.

Along with a picture of Gaga wearing a nude bodysuit, clutching her 'Armadillo' shoes, she wrote: ''Long Live McQueen. Look monsters, we got a sign of love from the beyond.''

The 'Alejandro' hitmaker also revealed she wanted the shoes as a ''memory'' of the friendship she had with the fashion designer.

Speaking to V Magazine, Gaga said: ''There is no diamond, no award, nothing I ever wanted more than a memory of my brief friendship with McQueen. I am sad every day that I enter my closet, knowing he is not here anymore to dazzle the world with his beautiful, dark, limitless, brave mind.''

''These shoes are the only tangible piece I have left of our work together.''