Lady GaGa was bitten by a slow loris while shooting the video for her new single 'G.U.Y. (Girl Under You)'. 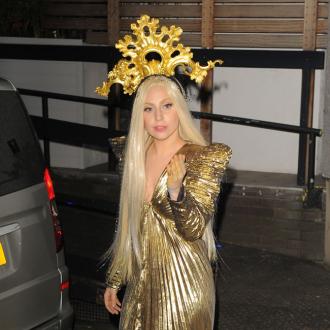 Lady GaGa was bitten by a slow loris on the set of her new music video.

The eccentric singer was filming the clip for 'G.U.Y. (Girl Under You)' in California when the cute creature - a small primate from Asia, which is an endangered species - sunk its teeth into her.

A source told the New York Post Newspaper: ''The slow loris is the cutest creature on the planet, and Lady Gaga wanted to use it in one scene, but it nipped her. They put it back in its box and took it away in disgrace.''

Gaga, 27, was unhurt, with the source saying ''she just laughed about it,'' but had a lucky escape, as the slow loris is the only venomous primate and wild ones can inflict a flesh-rotting poison deadly to humans.

The animal trainer also brought a baby kangaroo and an exotic goat to the set, but none were eventually used, after a California State Parks Department vetoed the idea.

The video was shot at Heart Castle, the residence built by eccentric former publishing magnate William Randolph Hearst in1919.

Gaga donated $250,000 to the Hearst Castle Preservation Foundation after completing the shoot to thank them for letting her use it.