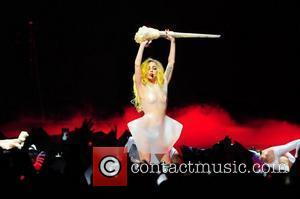 Lady GaGa has stepped in to overrule her management team and sanction Weird Al Yankovic's cover of her hit song Born This Way.
Spoof-master Yankovic spoke out earlier this week (beg18Apr11) to reveal Gaga's aides had banned him from including his mocking version of the song - titled Perform This Way - on his upcoming album.
But Gaga has now stepped in to lift the embargo, telling Yankovic she "loves" his track.
In a post on his official blog, he writes, "Apparently the fact that she didn't approve it was news to Lady Gaga herself. Gaga's manager has now admitted that he never forwarded my parody to Gaga - she had no idea at all."
All proceeds from the track will go to the Human Rights Campaign, which promotes equality for the lesbian, gay, bisexual and transgender community.