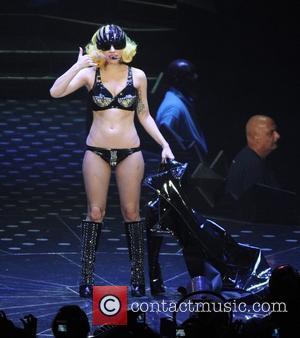 Lady GaGa has defended her racy new ALEJANDRO video following a storm of criticism over the religious imagery in the clip - insisting she will not be "broken" by "prejudice".
The promo, which Gaga has previously called "a celebration and an admiration of gay love", sees the saucy singer in her underwear writhing on a bed with semi-naked male dancers in a bondage-style scene. The video also shows Gaga dressed in a latex nuns' outfit, suggestively swallowing a set of rosary beads, and appears to include references to Madonna's famous videos for Like A Prayer and Vogue.
The religious elements in the clip have caused consternation amongst campaign groups including bosses at America's Catholic League, who have released a statement slamming the star's efforts.
It reads, "Lady Gaga is playing Madonna copy cat, squirming around half-naked with half-naked guys, abusing Catholic symbols - they're always Catholic symbols - while bleating out Alejandro enough times to induce vomit... She has now become the new poster girl for American decadence and Catholic bashing, sans (without) the looks and talent of her role model."
But Gaga has hit back at the complaints, insisting she won't let the negative comments upset her.
In a series of posts on her Twitter.com page, she writes, "So many will try to destroy me. So many, over and over, coming in periods of greatness. But in this period, I cannot be broken... Prejudice is a disease. And when they come for you, or refuse your worth, I will be ready for their stones..."
The video's director Steven Klein has also spoken out following the negative reaction to the footage, and he's adamant Gaga did not intend to portray the Catholic church in a negative light.
He tells MTV.com, "The religious symbolism is not meant to denote anything negative, but represents the character's battle between the dark forces of this world and the spiritual salvation of the soul. Thus at the end of the film, she chooses to be a nun (and she swallows the rosary beads to represent) the desire to take in the holy."