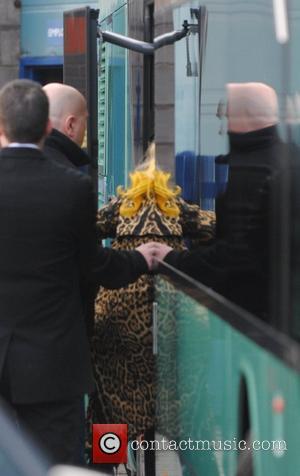 Lady GaGa is facing the wrath of bosses at an underwear company after she allegedly failed to return four "priceless" items of lingerie.
The Poker Face hitmaker was reportedly sent seven undergarments from Rigby and Peller, which supplies underwear to British monarch Queen Elizabeth II, Gwyneth Paltrow and Sophie Dahl.
Gaga was sent the exclusive items on loan to wear in her next music video, but company bosses allege only three of the briefs were returned.
Executives at the company claim the underpants were prototypes for their 2010 autumn/winter collection - due to be unveiled at a fashion show this week (beg03May10) - and their loss could stall the production line.
A spokesperson for the company tells Britain's Daily Express, "Obviously we were delighted that Lady Gaga wanted to use our new pieces in her next video but we did stress we needed them back in plenty of time for our press show.
"They are handmade, unique designs, simply priceless and not available anywhere in the world so we are really disappointed not to get them back for our major showcase of the year."
A spokesperson for Gaga tells the publication, "We've nothing to say."