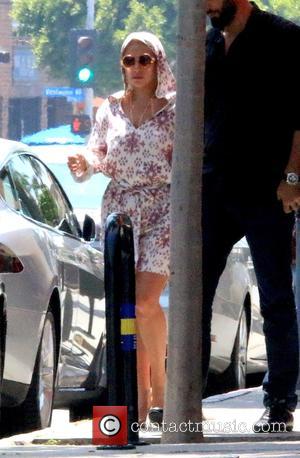 The On & On hitmaker, 44, hit the stage at The Roots' annual Roots Picnic festival in Philadelphia, Pennsylvania on Sunday (31May15), wearing a white crop top that showed her bare belly, but when snaps of her side profile surfaced, fans began to wonder if she's expecting her fourth child.

Badu quickly took to Twitter.com to set the record straight, reposting the photos in question on Monday (01Jun15) and adding the caption, "No, just fat."

Badu's friend and fellow singer Janelle Monae also chimed in to make light of the rumours, writing to her pal, "I just heard you were preggo (pregnant). Why wouldn't you tell me Twinn (sic)?? Feeling hurt and lost".

Badu wasn't the only one dismissing pregnancy rumours on Monday - Lady GaGa also laughed off speculation she and fiance Taylor Kinney are expecting a baby, blaming her recent weight gain for the rumours.