I can't say that I've ever considered myself a huge fan of Lady GaGa but no-one can deny that there's always something unique and intriguing about her. I approached 'Artpop' with an open mind; I was aware of the dangers of expectation and subsequent disappointment from such excessively hyped albums and I was staunchly uninterested in the worldwide phenomenon that was her second album 'Born This Way', so I was neither hopeful nor sceptical - although the mix of the likes of DJ White Shadow, Rick Ruben and Zedd in production did seem welcoming. 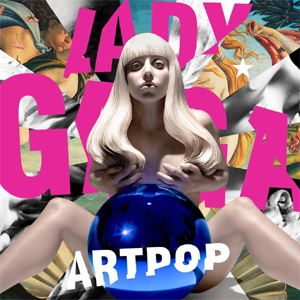 Album opener 'Aura'; the single co-produced by Infected Mushroom and Zedd that was used in the trailer for Robert Rodriguez's 'Machete Kills', Gaga's acting debut; offers a mournful, lo-fi opening verse from Gaga which almost sounds like an old-style Bond theme with a Spanish twang (quite literally) and is probably the album's main highlight. Other pretty fab openings came with the headbang-worthy power rock vocals of guitar fuelled 'MANiCURE', our first taste of hip hop with 'Jewels N' Drugs' featuring T.I., Too short and Twista, and the incredibly catchy 'Swine' ('I know, I know, I know, I know you want me/ You're just a pig inside a human body.' - that's a line that I'll be humming for a long time to come). However, the problem with all these tracks is that, although they have the potential to be exceptional, Gaga just can't seem to help throwing in a generic dance tune halfway through and there's no need when they start out so well. The woman we think we know so well for speaking her mind appears to have lost some of her nerve.

This was also visible in the album's structure. Tracks two and three, 'Venus' and 'G.U.Y.' are incredibly alike. Both mention Greek Gods and Goddesses - Aphrodite being the main one - and they have similar cosmic hooks. Putting these two songs so close together takes away from their sound a little as there's less distinction. And yet, 'Jewels N' Drugs' and 'MANiCURE' were side-by-side despite being totally different; this is a bit of a shock to the system, but is a good way of showing off the eclecticism of the album and should've been taken into account much more frequently throughout the rest of the tracklisting.

Continuing with the multi-genre theme, we get another lick of R&B in 'Do What U Want' featuring R. Kelly where Gaga's vocals are at her strongest. However, a rapid decline ensues with the particularly unimpressive title track 'Artpop'. What was expected to be something climactic, inventive and a little bit trippy with such a title, turned out to be a slow-paced, pretty damn ordinary tune that was nothing short of boring. Ironically, this is one of the only tracks that doesn't change tack halfway through.

On the final third of the album we get to hear quite an emotional side to Gaga with a few piano led tunes. 'Fashion!' kicks off with some lively ivories before melting away into the expected unoriginal pop beat, but the Rick Ruben co-produced 'Dope' actually maintains its solemnity and continues in a slow fashion with Gaga singing with intensity about the problems drink and drugs can have on relationships - and she seems to be appropriately slurring her words. 'Gypsy' is another pretty serious tune about having to choose between being in a relationship and living life on the road - rarely being able to choose both: 'I don't wanna be alone forever but I love gypsy life'. The album ends on a louder note with its lead single 'Applause' - verbally appropriate for an album closer, but I can't give it more than a polite clap.

'Artpop' is definitely an artistic album that she has clearly worked so hard on for the last couple of years, but as each song is broken up into so many different bursts of sound, the flow is massively affected. She continually lets herself down with forgettable attempts at hooks, and by the end the listener might find themselves still searching for something truly different. However, we always know Gaga is a master as reinventing herself, perhaps next time she just needs to follow through each song a little more succinctly.