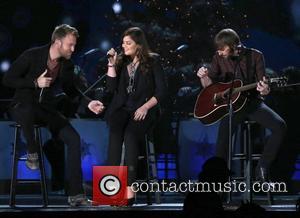 Chris & I are excited to announce that our Christmas gift has arrived a little early this year! We are having a BABY! We feel so blessed!!!

Undoubtedly fans and the rest of the band may look to the future and fret about the fate of touring and generally keeping up with the band's immensely busy schedule. But Hillary has proven herself to be a seriously dedicated musician and no doubt she'll be able to find away to juggle everything.

Lady Antebellum released their first Christmas album in October this year, called On This Winters Night but we suspect that no matter how well that album does in sales, nothing will compete with the joy that the news of the new addition to the family.